Positive birth story series: My 3 births with a midwife

Nicola Hogan shares the stories of her 3 births with a midwife as lead caregiver.

It was getting close. Very close. I’d been pushing for what felt like forever. I was tired. It had been such a long day.

My first labour was long. Longer than I expected. The first pangs were felt in the wee hours of the morning, around 3 am and then stopped. It all felt pretty easy. Nothing much happened after that, until the next day. 1 am those pangs again. Stronger, more regular and increasing in length.

Yep, this was it. I would meet my baby today.

At 25 I was excited and nervous, feeling very well prepared for what was to unfold. I had been reading Janet Balaskas’ Active Birth my whole pregnancy. I attended pregnancy yoga regularly and meditated. I received weekly pregnancy massage and reiki sessions. I felt so relaxed and ready.

The Family Birth Centre at King Edward Memorial Hospital was my choice. The midwives were so wonderful. I had come to know my team really well. I already knew which midwife I wanted to support my labour and was so happy that midwife Judy was on shift when I arrived at 4 pm that day, a long 15 hours after those first pangs.

I moved around, stayed upright and active. Showered and moved to the huge birthing bath. It was so peaceful. I visualised my baby entering the world in the water. But then, I felt icky. The water irritated me. So did my husband’s touch. I wanted out. Out of the bath and out of the labour. Transition.

I semi squatted on the floor with the urge to push. I pushed and pushed for close to 2 hours. Judy gently encouraged me and said, “I know you are tired. You are doing so well. The baby is fine, but if the baby doesn’t come in the next 15 minutes, we will have to consider transferring you to the main hospital.”

No way! Not on my watch. I changed position. With a mirror at my legs, I pushed. I mean REALLY pushed, and within 10 minutes I was crying with joy and cradling my sweet baby boy. I stood up, a bit jelly-legged (and bellied) and walked out of the bathroom. The threat of intervention gave me the strength I needed to push. I dug deep. And it was awesome.

Fast forward to 4 years later, I am swaying in my shower, hot water feeling so good on my back and my belly.

These contractions were full on. Intense and close together. But I’d only been feeling them for about 2 hours. Surely I had hours to go, right?

We called the Family Birth Centre, and the grandparents to come to stay with child 1. I was in luck, Judy my midwife was on shift again. By the time our family arrived, I was contracting very fast.

It was a challenge to get in the car. Intense, regular contractions. Lots of panting. We’d joked about giving birth in the car on the side of the road. Actually, I had joked, my husband had looked horrified and thought it to be his worst nightmare. With the radio on and windows down, hubby sped along Stirling Highway.

Of course, we got all the red lights. Each stop jolting my contractions to work harder and faster.

We were so close, on the home stretch. We flew through the lights at the intersection of Railway Parade and Nicholson Road. I felt a huge contraction, followed by the sound of sirens. My husband accelerated. The sirens persisted. They were for us. A few expletives escaped hubby as he pulled over. I gripped the chair and dash, white-knuckled as another contraction took hold.

A young policeman appeared at the driver’s side window. He enquired as to why my husband was speeding. I groaned out loud. My husband pointed. “Baby coming!” he said.

We were so close to the Family Birth Centre, half a kilometre away and we got a police escort! Ha! It was the funniest thing. Every step out of the car, to the birth suite, was hard. Wave after wave of contraction stopped me in my tracks. My midwife Judy palpated my cervix and said I was 5 centimetres. “Run the bath,” I said.

She left the room and I felt the urge to poo. I waddled to the toilet, the contractions seem to have subsided. I took that moment on the loo to pause and breathe and have a giggle at the drive in. We made it, it was a close call.

My waters broke on the toilet, followed by a very strong sensation, an expansion and pressure. “I can feel the head!” I called. “The baby is coming! Get Judy!”

My husband had only just set up the diffuser. He raced out to the hall and called for Judy. I somehow managed to crawl to the bed and leaned over, vomiting three times in the process. Dave and Judy arrived. My body gave out to 2 massive surges and the baby was born. We nicknamed him Turbo.

It was a lovely autumn day in Margaret River, five years ago. Perfect for moving my office to the chiropractor’s clinic at the yoga school. Baby number three was due in about 7 days.

I was feeling really well, if not a tad grumpy. I put it down to restless legs and night waking.

My subcontractor was on break before she commenced full time. I wanted to get the massage office completely set up before she got back the next night.

I had a chiropractic adjustment, my left hip and lower back were tight. I began to move furniture, equipment, oils and charts. I was having braxton hicks regularly. I was used to it. They had been coming on and off for a week.

As I sat down at the front desk to do some admin, I felt extremely uncomfortable in my cervix area, a sharpness. I couldn’t sit down. So I stayed on the go. I walked to the bakery for lunch. I moved my massage table and bookcase and set them up.

The chiropractor, who was a friend and also pregnant said to me, “I reckon you are in the early stages of labour.” I laughed it off, reminding her that both my boys were 3 to 5 days late and that this baby still had another 10 days in utero. Nevertheless, I thought I would give my mum a call, just to let her know how I was going. Mum lives in the Swan Valley, a 3-hour drive from Margaret River. She was set to come and stay and look after the two boys when I had the baby.

With the braxton hicks persisting all day, I got my office set up and headed back home for school finish. My boys both had hockey training that evening. It was also Taco Tuesday in our house and I had forgotten to pick up the key ingredient, the tacos. Hubby took the boys to hockey training and I headed into town to the supermarket. Those braxton hicks were feeling a bit stronger and more regular. I called mum and let her know and insisted that she still didn’t need to come down. I contacted a friend down the road and organised for her to be a backup carer for the kids, just in case.

I was fascinated with birthing stories during this pregnancy. I had read hundreds in books and blogs. Happy stories and devastating ones. Fast births, unplanned home births and everything in between. I was well and truly ready for however this baby girl would enter the world.

At the supermarket, I bumped into my friend who used to be a midwife. We chatted about how I was feeling. I had to pause mid-sentence a few times to breathe but kept on going. She agreed that it could still be a few days away because third births are similar to first.

At dinner, eating tacos, I felt dreamy and vague. I was listening to the kids talk, nodding, but not really present. I was very uncomfortable. That cervix pain was back. Hubby left the table to run the bath for the boys. I stood up and felt something wet and slimy. My waters had started to leak. I went to the toilet and there it was, the show. My mucus plug had come away. That explained the cervix discomfort.

I couldn’t sit down. The contractions increased, but still not enough to make me think the baby was on her way. I sent my hubby off to bed at 8.30 pm, just in case. The boys were in bed. I called mum. She insisted on coming. In fact, she had already packed her bags into the car. I made herbal tea, ate dark chocolate and swayed to the music.

At 11.45 pm when mum arrived, I could barely string a sentence together. Mum timed the contractions, something that I hadn’t thought to do all day. She insisted that I call my midwife and wake up hubby. Half an hour later, I waddled down the hall to the labour ward, contracting hard and regularly as I went.

At the country hospital, there is only ever 1 midwife and 1 registered nurse on at night. They called my GP/obstetrician and informed her of my progress. Everyone agreed it would still be hours until the baby arrived.

I decided a shower would feel really good. Hubby set up the lantern and battery operated candles and I kneeled on a mat over the fit ball in the shower. The water felt so good. It was the first time all day that I had been able to rest. I breathed and swayed.

And then, about 15 minutes later, I felt her head between my legs. The midwife came in, she called out to the RN for support. Unfortunately, she needed to turn the shower off and the lights on. I was okay with that, my baby was nearly here.

Three gentle deep breathes and she arrived, in the shower. I stood up, and walked to the bed, babe in arms. My GP didn’t arrive in time, and I was totally fine with that. My previous two births were with midwives only and that was how I wanted this birth to be.

That was 5 years ago. My birthing experiences were positive. Each different, but yet the same, in that I remained calm and surrendered my body to the process. Thank you to Nicola for sharing her story. 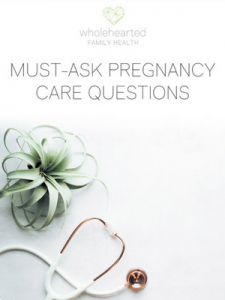 Would you like a free cheatsheet of must-ask questions to ask
your pregnancy care provider?
Feel empowered for your pregnancy and birth experience.
Get your free copy here!